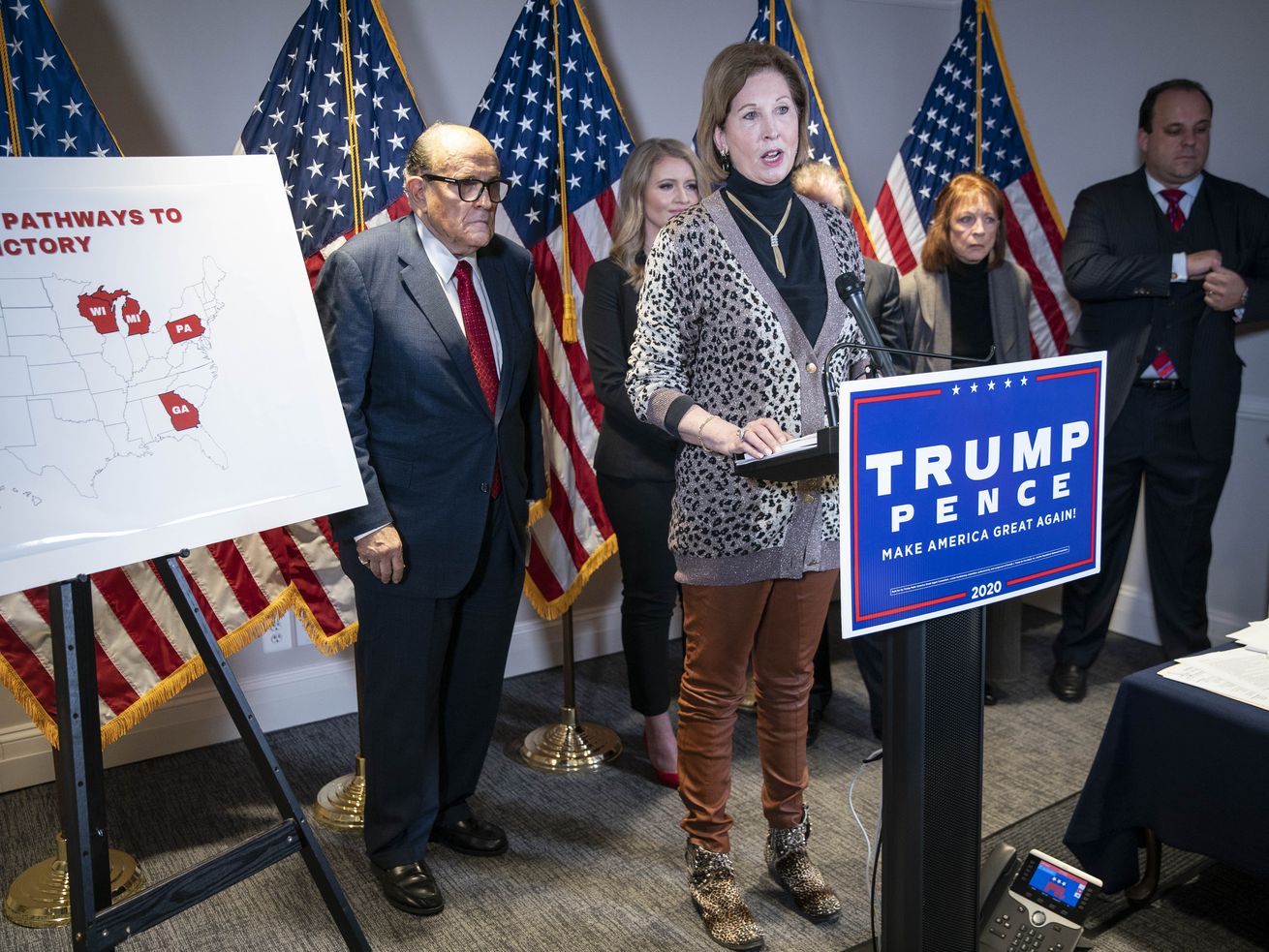 The controversial lawyer has advanced conspiracy theories about the election.

President Donald Trump asked key advisers about appointing a controversial lawyer formerly associated with his campaign as a special counsel charged with overseeing an investigation of alleged — and nonexistent — voter fraud, according to a report from the New York Times.

That lawyer, Sidney Powell, has gained notoriety in recent weeks for spreading conspiracy theories about voting machines being rigged for President-elect Joe Biden, for filing legal documents riddled with basic errors, and for being suddenly removed from the Trump campaign legal team. By appointing Powell a special counsel, Trump would be elevating her false claims, giving already disproven attacks on the presidential election a misleading patina of legitimacy.

According to Times reporters Maggie Haberman and Zolan Kanno-Youngs, Trump held a meeting at the White House on Friday to weigh whether to name Powell as a special counsel to investigate his repeatedly debunked claims of mass voter fraud in last month’s presidential election.

Flynn and Trump reportedly discussed imposing martial law in an effort to use the military to force states to rerun their elections. Flynn has supported petitions for Trump to use powers in the Insurrection Act of 1807, which gives a president power to deploy troops in order to quell an armed rebellion. Powell has also retweeted calls for Trump to use these powers and establish “military tribunals.”

And Flynn brought up the idea of declaring martial law to overturn the election in an interview with conservative cable news channel Newsmax recently, saying, “People out there talk about martial law like it’s something that we’ve never done. Martial law has been instituted 64 times.”

Here’s Michael Flynn on Newsmax saying that Trump could order “military capabilities” to swing states and “rerun an election in each of those states.””People out there talk about martial law like it’s something that we’ve never done. Martial law has been instituted 64 times.” pic.twitter.com/KNmiAGGiPF

Sources told the Times and Politico that Trump was interested in this idea; the military, however, has dismissed it out of hand, saying Friday it would have “no role” in US elections. Trump has claimed these reports are false, tweeting, “Martial law = Fake News. Just more knowingly bad reporting!”

There was also reportedly discussion of how to take control of allegedly compromised voting machines for examination. Voting officials, however, have not found that machines caused widespread errors — and multiple recounts in states like Georgia have caught any minor errors that did occur in counting. Giuliani has recently advocated a scheme in which the Department of Homeland Security would seize these machines; however, the department has reportedly told him it cannot do that.

According to the Times, many Trump advisers present at the meeting — including White House counsel Pat Cipollone and chief of staff Mark Meadows — reportedly pushed back on Powell’s ideas and proposals, and some suggested he rethink naming her a special counsel. But Trump himself is said to have signaled support for her, inquiring about getting her a security clearance.

Trump has been advocating for the appointment of a special counsel to look into his claims about the election since it became clear that he would lose.

Trump has also wanted a special counsel to investigate Hunter Biden, the son of President-elect Joe Biden. This was one of the causes of his falling out with US Attorney General William Barr, who was aware of a Justice Department investigation into Hunter Biden, but worked to keep the inquiry from becoming public knowledge until after the election, to avoid political interference. Barr also publicly admitted that no evidence of widespread election fraud exists. He has subsequently announced his plans to depart from office before Christmas.

It is not clear that Trump could actually appoint Powell — or anyone else — to investigate fraud as a special counsel in his remaining days in office.

As Vox’s Jennifer Williams has explained, special counsels are usually appointed by the US attorney general, and that counsel would be supervised by the attorney general themselves. Trump could ask Barr to appoint Powell, but it is not clear that he would do so, and Barr is due to step down on Wednesday.

In his absence, deputy attorney general Jeffrey Rosen would be responsible for this task. According to Politico, Rosen has declined to say whether he plans to name a special counsel, and DOJ spokespeople have not commented. USA Today notes that he pledged to avoid political interference in his 2019 confirmation hearing, telling lawmakers, “If the appropriate answer is to say no to somebody, then I will say no.”

Should his Justice Department refuse to cooperate, Trump could name a special counsel without DOJ support. But that person would essentially be toothless, with no access to federal law enforcement resources, subpoena power, or the ability to set up a grand jury.

The other possibility is that Trump, in his final weeks in office, could fire Rosen and replace him with someone more likely to enact his wishes, although who that person could be is not immediately obvious.

Nevertheless, special counsels have been of interest to Trump, who has been subject to their investigations since his first year in office amid scrutiny of foreign interference into the 2016 election.

According to a CNN report, he has raised the possibility of using their powers to impose his own priorities in his final days of office, which include simply slowing down Biden administration priorities on his way out the door.

And having a special counsel on election fraud would be a powerful legacy. The Biden administration would likely face pressure not to interfere in a special counsel investigation, even one led by a partisan actor like Powell, thus ensuring that debate over the legitimacy of the last election would continue at the federal level even once Trump is no longer in office.