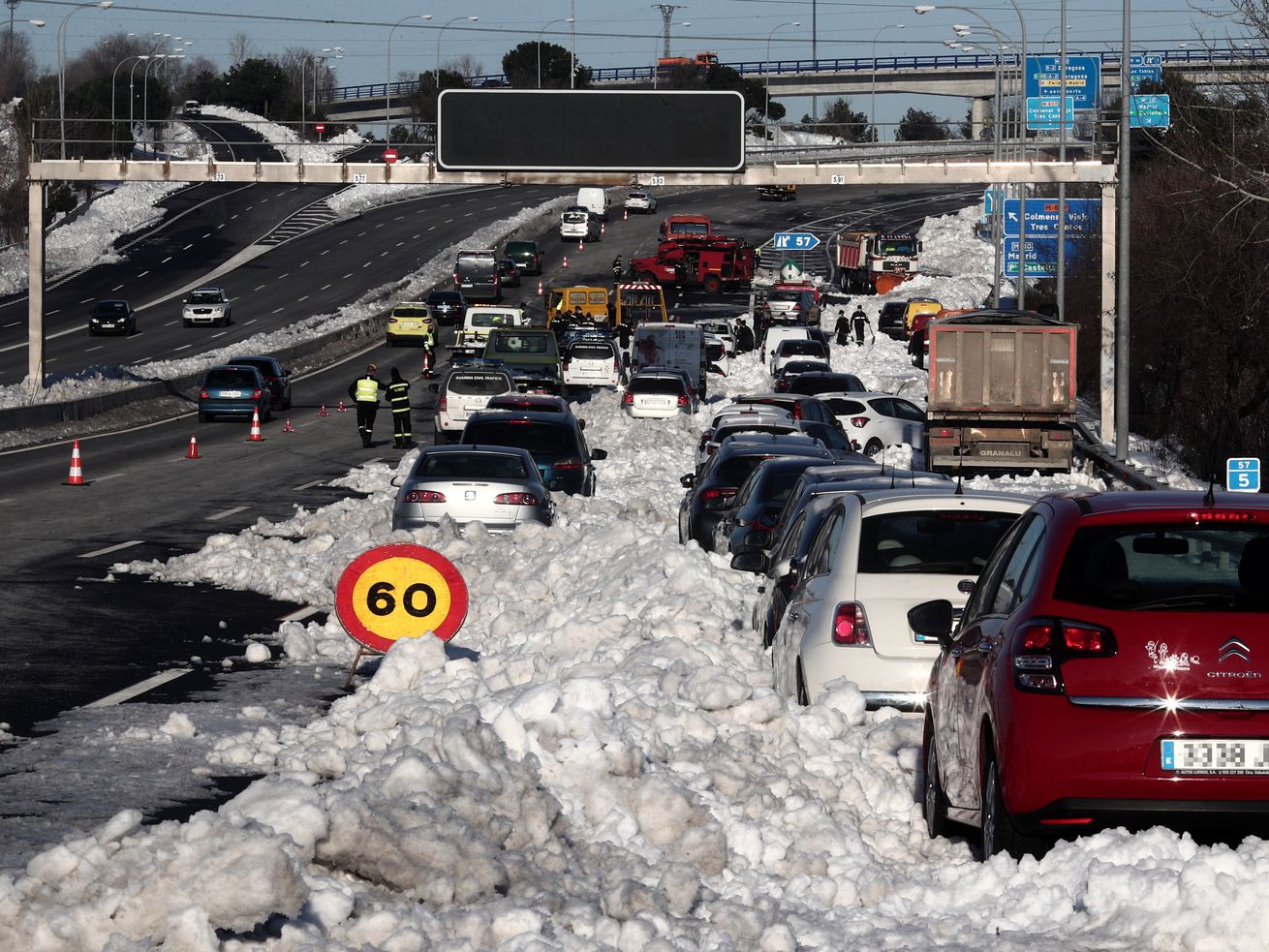 Vehicles trapped by snow on the M-40 in Madrid, Spain, on January 11, 2021. | Eduardo Parra/Europa Press via Getty Images

Spain is still digging itself out after the biggest snowstorm to hit the Mediterranean country in 50 years slammed the capital, Madrid, and surrounding regions over the weekend, disrupting transit and efforts to distribute coronavirus vaccines, and causing at least four deaths.

The bulk of the snow from Storm Filomena began falling Friday evening and left 20 inches in the capital and nearby provinces by the end of Saturday.

Rail service in some areas was suspended, and the New York Times reported that 12,500 miles of roads were closed or disrupted. Firefighters, members of the military, and emergency crews worked to clear runways and roads from Friday into Saturday, freeing more than 1,500 people trapped in their cars in freezing temperatures.

Although hundreds of roads had been cleared by Sunday and outgoing flights had resumed at the Madrid-Barajas airport, the Associated Press reported that roads in parts of the country were still largely blocked, and officials warned the country was not yet in the clear.

“A week of extreme cold is coming and that will transform all the snow on the ground to ice, thereby multiplying the risk,” Interior Minister Fernando Grande-Marlaska told reporters on Sunday. “The storm is bringing with it a cold wave that could push temperatures down to record levels,” he added.

At least four people died as a result of the storm. Two people experiencing homelessness died from exposure — one near Madrid and another in Calatayud, a city located in the country’s northeast. A woman and a man also drowned after their car was swept away in floods when a river burst close to the southern town of Malaga.

Government authorities on Sunday cautioned people to stay off the roads as much as possible, the AP reported, saying that although everyone trapped in their vehicles had been rescued, many abandoned vehicles remained on roadways.

Many Spaniards took advantage of the snow to enjoy some winter fun. On social media, scenes of Spaniards in the streets, happily engaging in mass snowball fights made the rounds.

Madrid’s Gran Via today was the scene of an epic snowball battle interumpted briefly by a skier who swiftly became the target #NieveInMadrid #Filomena #NevadaMadrid #Madrid #nievemadrid #snow pic.twitter.com/cGsD4Y1ig1

Some revelers were even seen skiing through Madrid’s streets.

Although Spanish reports predicted snow, few expected it would be so intense.

Rubén del Campo, a spokesperson for Spain’s government meteorological office, Aemet, told reporters that “you’d probably have to look back to the 1970s for snowfall of a similar magnitude in and around the capital.”

It can be incredibly difficult to pinpoint exactly what combination of factors produced this (or any) extreme weather event, but experts I spoke to said Filomena’s historic snowfall might have happened because high levels of moisture combined with temperatures that are perfect for snow, at just the right time.

In general, the warmer the air, the more moisture it can hold, increasing the potential for precipitation. It’s possible the air before Filomena contained more moisture and then met the “Goldilocks conditions” of about 28°F to 32°F that’s necessary for snowfall to stick on the Earth’s surface.

As Kevin Trenberth of the US National Center for Atmospheric Research told me, “Maximum snows occur when surface temperatures are about 28 degrees Fahrenheit and there is plenty of moisture flowing into the storm from the oceans, where moisture is abundant, and more abundant than it used to be because of global warming.”

In the case of Filomena, Trenberth added, “conditions were just right.”

That doesn’t necessarily mean climate change is directly responsible for Spain’s snowstorm, though.

“It isn’t possible to associate this one storm with anything directly associated with climate change,” Robinson, from Rutgers, told me. “However, having said this, there is nothing in the weather world these days where climate change doesn’t have some underlying influence on what transpires.”

Source: Spain is still digging itself out from its worst snowstorm in 50 years