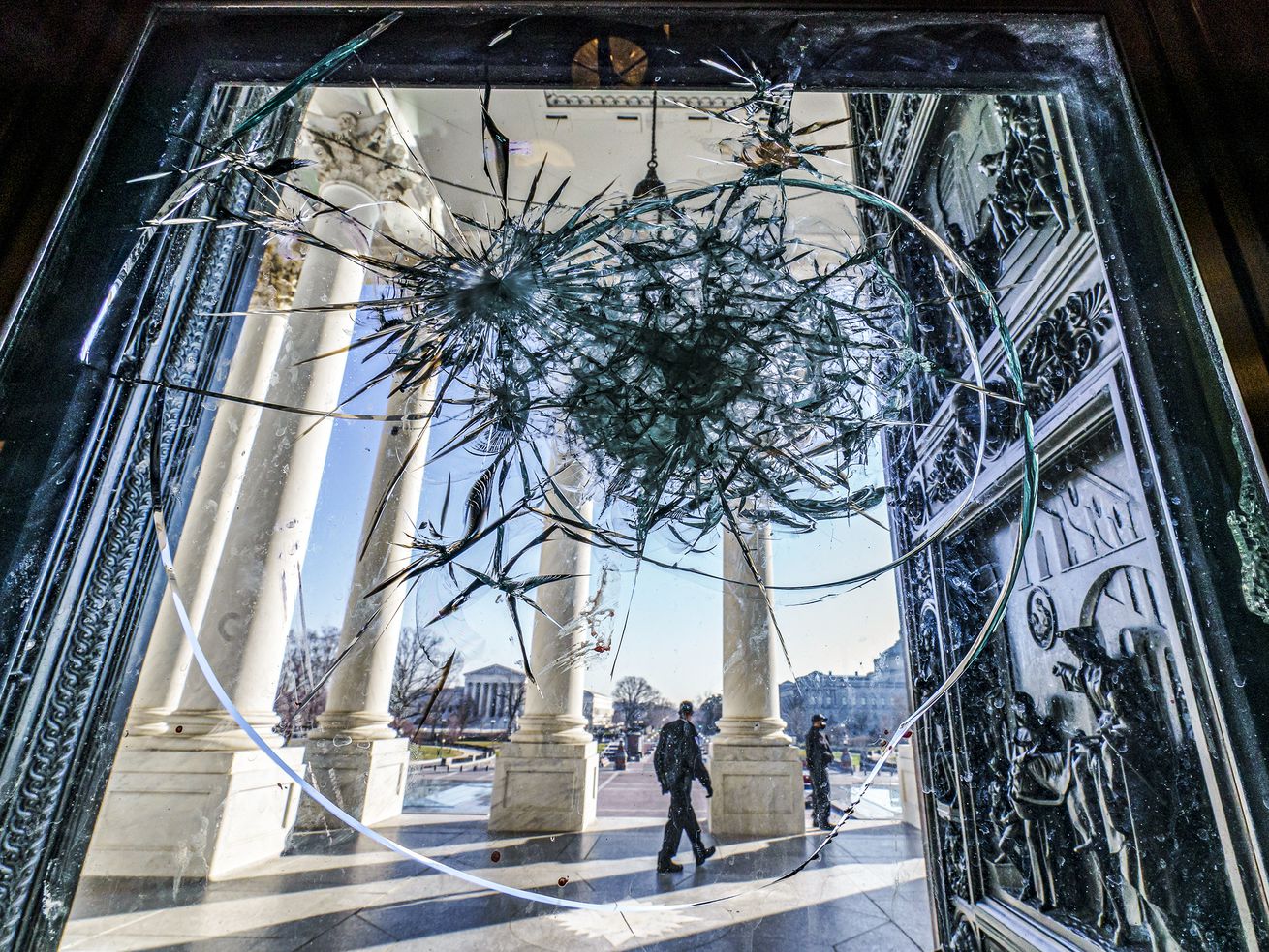 Shattered glass from the January 6, 2021, attack on Congress by a pro-Trump mob is seen on the doors leading to the Capitol Rotunda. | J. Scott Applewhite/AP

Pence has already said he won’t be invoking the 25th Amendment to remove Trump — but Tuesday’s vote picked up bipartisan support.

A House vote on Tuesday revealed strong support for President Donald Trump’s removal in the wake of the violent January 6 attack on the Capitol.

House lawmakers on Tuesday voted 223-205 to approve a resolution from Rep. Jamie Raskin (D-MD) that urges Vice President Mike Pence to use the process outlined in the 25th Amendment to force Trump to step down. One Republican — Rep. Adam Kinzinger (R-IL) — voted in favor of the resolution alongside Democrats.

While the resolution isn’t binding — and Pence has already said he won’t be invoking the 25th Amendment — the vote captured the House backing in favor of Trump’s removal from office. Multiple Republicans including Reps. Liz Cheney (R-WY), John Katko (R-NY) and Kinzinger (R-IL) had also announced earlier in the day that they plan to support Trump’s impeachment, which will get a vote on Wednesday.

Notably, House Republicans are not planning to whip the impeachment vote, CNN and Politico reported. In other words, while most GOP members of the House are expected to vote against impeaching the president, party leaders won’t try to convince the small group of lawmakers planning to defect from doing otherwise.

Calls for Trump’s resignation or removal have increased since January 6, when the president urged his followers to march toward the Capitol and express their concerns about the certification of the election results. The 25th Amendment — which enables the vice president and a majority of the Cabinet to declare a president “unable to discharge the powers and duties of his office” and force them to step down — has been viewed as the fastest way to remove Trump, though Pence has already said he won’t be taking this route.

The House on Wednesday will weigh one article of impeachment, charging Trump with inciting an insurrection. Given the overwhelming majority of Democrats who are on board, Trump is poised to become the first US president in history to be impeached twice.

Tuesday’s 25th Amendment resolution is the first of two votes the House will take in its attempt to remove Trump from office.

The House will introduce an article of impeachment Wednesday morning, setting up a vote on it for later in the day. Democrats had 217 cosponsors for the resolution as of Tuesday afternoon, per Rep. David Cicilline, one of the authors.

The House will vote on the single impeachment article, charging Trump with “incitement of insurrection” for his role in encouraging a mob of his supporters who later stormed the Capitol. Trump spoke to a crowd at a “Save America Rally” prior to the riot, during which he repeatedly said the election was “stolen” and asked them to march to the Capitol “to see whether or not we have great and courageous leaders or whether or not we have leaders that should be ashamed of themselves throughout history, throughout eternity.”

In their impeachment article, Democrats also mention Trump’s recent phone call with Georgia Secretary of State Brad Raffensperger in which he encouraged Raffensperger to “find” more than 11,000 votes to overturn the election. It also references Trump’s rhetoric about the November election being “fraudulent,” a lie he has repeated since his loss.

But the biggest thing Democrats are focused on is how Trump’s continued lies resulted in violence and death in DC, marking the first time Capitol Hill was breached since the British invasion of 1812 — and the first time by American citizens.

If the House does pass the article of impeachment, Pelosi will then transmit it over to the Senate. By then, Democrats could be staring down a lengthy trial with just days left in Trump’s term. Some, including Sen. Joe Manchin (D-WV) are worried that could hurt Biden’s ability to get his Cabinet nominees approved and critical pieces of his agenda passed.

“We have to put our government together quickly — that’s the most important thing we should do,” Manchin told the Post last week. “We don’t need any more political theater.”

According to a memo from Senate Majority Leader Mitch McConnell, the Senate will not convene for regular business until January 19 unless lawmakers agree to do so earlier by unanimous consent. Given the likely Republican opposition to an earlier start, the Senate probably won’t be in full session for another week.

That timing means the start of an impeachment trial would coincide with that of the Biden administration, which officially begins after Biden and Vice President-elect Kamala Harris are sworn in on January 20. To get a trial started sooner, incoming Senate Majority Leader Chuck Schumer has urged McConnell to reconvene the upper chamber by using emergency powers established under a 2004 law.

According to the law, Senate majority and minority leaders are able to reconvene the Senate in times of emergency — essentially bypassing unanimous consent to do so — if both lawmakers agree to it. Speaking on Tuesday, Schumer said, “This is a time of emergency.”

“The bottom line is that Leader McConnell has the ability to call us back into session. And we can then move to convict Donald Trump in the impeachment trial and try him,” he added. “That’s what we hope McConnell will do.”

McConnell has yet to comment on whether he’d agree to this arrangement, but it’s unlikely he will. As a result, starting in late January the Senate is set to juggle both an impeachment trial, its own legislative agenda, and confirmations for Biden’s Cabinet nominees.

House Majority Whip Jim Clyburn previously suggested the House could hold off on sending the articles of impeachment in order to delay a potential trial, but some Democrats — including Majority Leader Steny Hoyer — argue that sooner is better. As the rules go, once the House sends articles of impeachment to the Senate, the upper chamber must begin the trial shortly thereafter.

What exactly this will look like in practice isn’t yet clear: Biden has suggested the Senate could split its time by tackling legislation and nominations in the morning and conducting the impeachment trial later in the day. “Can we go half day on dealing with impeachment, and half day getting my people nominated and confirmed in the Senate as well as moving on the package?” Biden seemed to suggest on Monday.

Time in the Senate was also split between impeachment and other legislative business during Trump’s 2020 trial, Politico reported. In an interview with Buffalo News, Schumer signaled the upper chamber was likely to take this approach.

“We’re going to have to do several things at once but we got to move the agenda as well. Yes, we’ve got to do both,” he said.

Source: The House just passed a resolution calling on Mike Pence to invoke the 25th Amendment