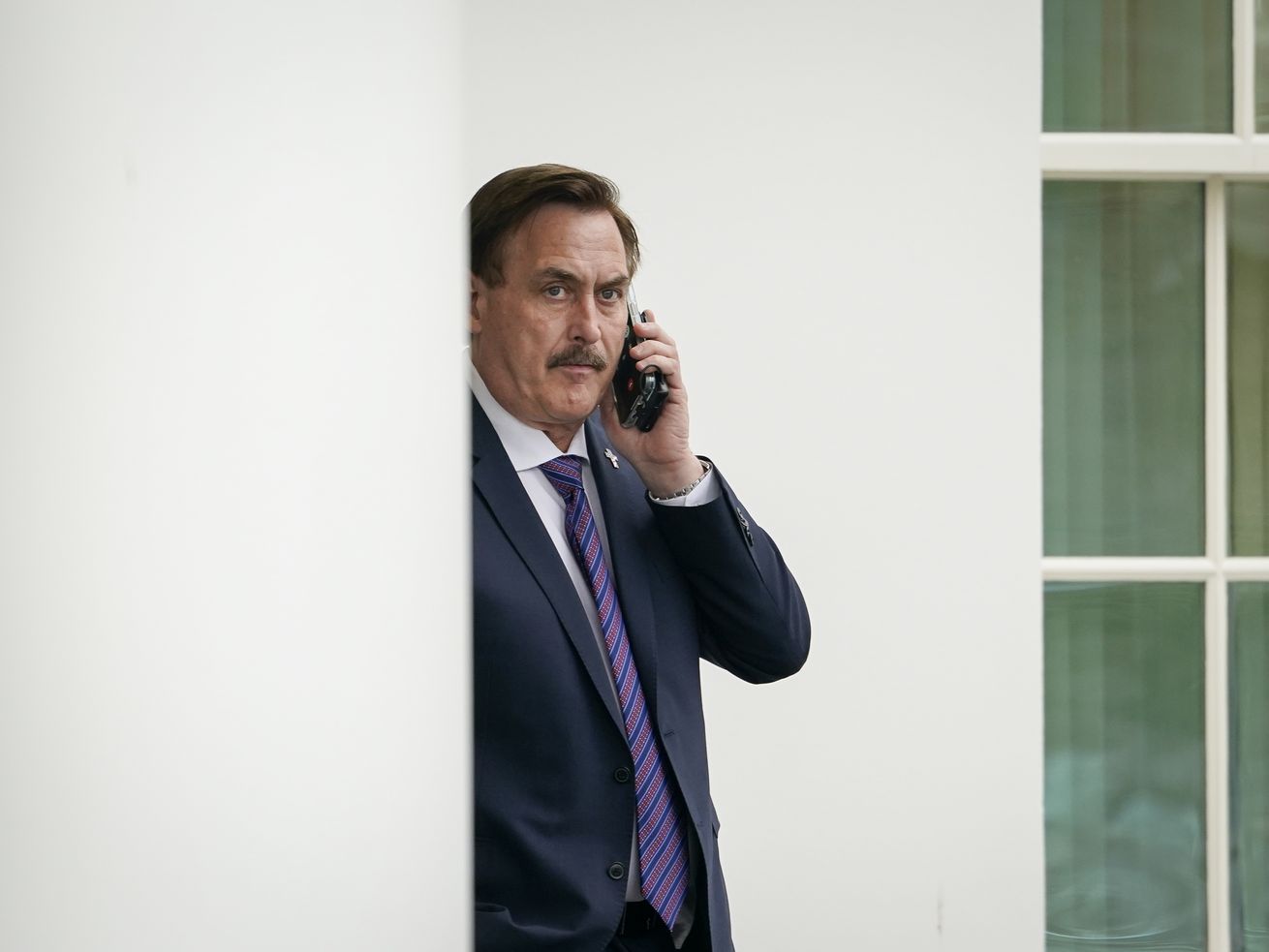 MyPillow CEO Mike Lindell waits outside the West Wing of the White House on January 15, 2021. | Photo by Drew Angerer/Getty Images

The MyPillow guy has some thoughts about invoking martial law.

On Friday, Mike Lindell, the CEO of bedding company MyPillow (you’ve probably seen the commercials) and an avid Donald Trump backer, went to the White House to talk to the president about some conspiracy theories. He reportedly presented Trump and his team with six pages of notes with unfounded claims that China and other countries stole the election from him along with a litany of other strange theories.

Washington Post photographer Jabin Botsford captured some images of Lindell and his papers, which appeared to suggest the president was considering invoking the Insurrection Act, a law that lets the president deploy military and National Guard troops to the streets and the use of “martial law if necessary.”

@MyPillowUSA CEO Michael Lindell shows off his notes before going into the West Wing at the White House on Friday, Jan 15, 2021 in Washington, DC. pic.twitter.com/AY6AyJNSyE

Lindell told the New York Times after the meeting that the notes were given to him by a lawyer he wouldn’t identify. He told Times reporter Maggie Haberman that it’s someone he’s been working with to prove Trump really won the election and that some of the information was tied to reports Trump couldn’t see otherwise because he’s been banned from Twitter.

But it seems the White House wasn’t picking up what Lindell was putting down: He got only a few minutes with the president and was otherwise given the runaround. He told the Daily Beast that Trump asked for him to be taken to a different room to show his findings to “the lawyers ” but that after a couple of hours of waiting “the lawyers” were disinterested in his claims. He didn’t even get to say goodbye to Trump. “Maybe [Trump] got busy, I don’t know,” he told the Daily Beast.

Most of corporate America has abandoned Trump in the wake of the Capitol riots on January 6 that left five people dead — riots incited, in part, by the president’s own rhetoric casting doubt on the 2020 presidential election and his encouragement that his supporters fight back. But Mike Lindell is not giving up on Trump. Unfortunately for Mike, it seems Trump might be giving up on him, or, at least on Friday, the president’s team wasn’t in the mood for his antics.

Lindell’s presence in the White House on Friday also says something about Trump’s final days in office: Many of his aides and advisers have abandoned him, and it’s a lot of his die-hard supporters — ones who aren’t exactly bringing their A-game — who are left.

Who the MyPillow guy even is

Lindell is the founder and CEO of MyPillow, a company that, as the name suggests, makes and sells pillows. His shtick is that he guarantees it will be “The Most Comfortable Pillow You’ll Ever Own.” The company also makes other products — sheets, blankets, towels, dog beds, etc.

But Lindell is into more than pillows. He is also very into Donald Trump.

He has become a fixture in Trumpland — he co-chaired Trump’s reelection campaign in Minnesota, gave Trump ad advice, and, since November, has funded some of the weirder election challenges brought about by lawyers Sidney Powell and Lin Wood. The protesters who stormed the Capitol were Trump supporters, but Lindell has been among those insisting that they were secretly “antifa” activists posing as MAGA devotees. Over the summer, he also claimed to have found a cure for Covid-19 — a cure that was potentially toxic and is not safe to ingest.

Meredith Haggerty at the Goods has an explainer on Lindell and his path from drug addiction to businessman to a Christian, as he recounts in his self-published memoir, What Are the Odds? It also lays out how he found Donald Trump (it involves a premonition) and why the Trump-Lindell combo makes sense:

His relationship with Trump makes sense for Lindell — if ever a man was going to increase his platform it would be by aligning himself with a kindred spirit pitchman, a man with whom he shares a checkered past and evangelical overtures. In this way, it makes sense for Trump as well; Lindell has the religious bona fides.

By his own writing, Lindell, who is 59, only became interested in politics in 2015. Trumpism is the main animating political philosophy in his life; Trump is the be-all and end-all of his interest in politics, which is not uncommon among the president’s staunchest supporters.

Trump has reportedly urged Lindell to run for Minnesota governor.

Why Mike Lindell was at the White House

Many of the election conspiracies floated about the election are confusing, including the ones Lindell brought to the White House this week.

The Daily Beast gets into many of the details of Lindell’s documents, which suggested that China and other countries engaged in hacking operations to hand Joe Biden the presidency. He claims they’re “all over the internet,” but also big tech companies are keeping them hidden. He also showed the president an article from a conspiracy theory website about China and the election that somehow also has to do with Russian cybersecurity CEO Eugene Kaspersky, Chinese telecom Huawei, and Amazon, among others.

The images of Lindell’s papers also appear to have a suggestion that Kash Patel, the chief of staff to the Defense Department, be made acting director of the CIA. That would mean Patel, a Trump loyalist, would replace CIA Director Gina Haspel, who Trump has reportedly wanted to fire off and on.

Trump apparently gave Lindell a few minutes and then sort of offloaded him onto others in the White House. According to the Times, two of the people he was offloaded to — national security adviser Robert O’Brien and White House counsel Pat Cipollone — were among those Lindell’s documents suggested firing.

Lindell told Haberman that the papers he was photographed holding that say “martial law” didn’t say “martial law.” He appears to have become quite frustrated with the ordeal. The Times reported that Lindell got “loud” while having to wait in the lobby of the West Wing and was a little mean to Cipollone’s assistant.

“They tried to deny it, saying, ‘We don’t think it’s relevant,’ and I said, ‘Don’t try to discredit it,’” Lindell told the Daily Beast. “They said they would ‘look into it and get back to you.’ And I told them I just want them to know the truth. … How horrible is it that we are about to have an illegitimate president? People on the left and right should want to know the truth.”

Of all the ways to spend your final days in the White House, this is certainly one of them

Maybe Mike Lindell is an okay guy. Or at the very least, he’s good at selling pillows. But he’s not exactly the top political mind in America, and he’s who Trump is left with in the end.

Trump still has plenty of support within the Republican Party, but it’s quite a bit below what it used to be, at least for now. Inciting a violent riot and being impeached two times has not been great for the Trump brand, political, business, or otherwise. But Trump did have a point when he joked that he could shoot someone on Fifth Avenue and keep support — guys like Mike Lindell aren’t going anywhere. Even if, as appears to have been the case on Friday, Trump isn’t in the mood to entertain them much.

Lindell is an avatar for Trump’s most diehard supporters, the people who prioritize him over pretty much anything else, at least in politics. Like a lot of those supporters, he believes — or at least he says he believes — a litany of internet-fueled conspiracies about the election and the political landscape. Take a look at his Twitter feed, and you’ll see it’s filled with pro-Trump propaganda and content that’s been flagged by the website as dubious.

How long will Lindell and people like him stick around with Trump? It looks like they’re in it for the long haul — whether Trump is always into it or not.

Source: Why the MyPillow guy was at the White House, explained as best we can