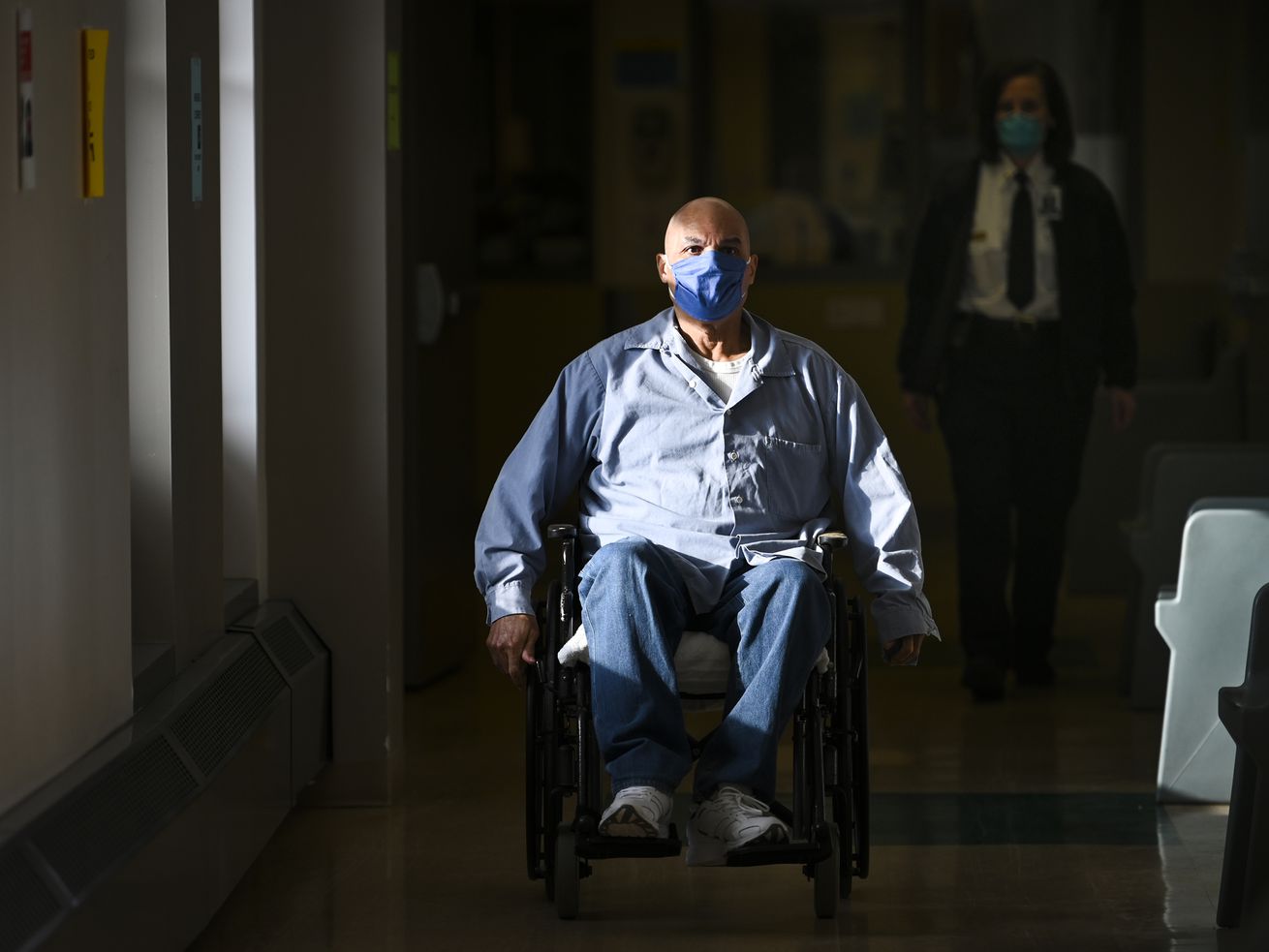 The first medically vulnerable inmates in Minnesota were vaccinated at the Faribault Prison in Faribault, on January 4. | Aaron Lavinsky/Star Tribune via Getty Images

Prisoners say they’re “scared as hell” about a continued lack of vaccines, testing, and masks.

The rapid spread of new variants of the coronavirus, some of which seem to be more contagious than older versions, has experts in the US calling for stricter social distancing and better masking to avoid yet another big surge of new Covid-19 cases and deaths.

Health advocates and epidemiologists are particularly concerned about what will happen once the new variants find their way into prisons, jails, and immigration detention facilities.

Across the US, at least one in five incarcerated individuals has already been infected with Covid-19, and a disproportionate number of them have died. One study found that the 2.3 million Americans living behind bars have twice the risk of dying from Covid-19 as a similar person who is not.

Jaimie Meyer is an associate professor at Yale School of Medicine and a researcher and clinician who specializes in the spread of infectious diseases behind bars. The pandemic “has laid bare [and] exposed the issues around conditions in confinement,” she told Vox, including how difficult or impossible it is to truly safeguard those held behind bars. In its quest to survive, Covid-19 will find “all of the holes [in our public health strategy] … all of the weaknesses, and pressure test them” she added. “If facilities have not done something to keep people safe, a more highly transmissible strain will spread like wildfire.”

Prisoners are at an increased risk of Covid-19 for a simple reason: how the virus spreads. Scientists now know that the illness is mostly passed from person to person through respiratory droplets and sometimes through the air, which is why being in sustained, close proximity to others is so risky — and why crowded prisons and jails are especially dangerous. Contagion also frequently happens even before someone has symptoms, making it impossible to know who to isolate without frequent, rapid, near-universal testing.

“Congregate settings in general, and prisons in particular, are places where physical distancing is impossible,” said Meyer. Moreover, she added, people in prisons are more likely to have certain medical conditions, including obesity and diabetes, that put them at greater risk of infectious diseases.

The epidemiological realities of Covid-19 have been exacerbated by the failures of elected officials and institutions whose job it is to protect those who are incarcerated. Chris Beyrer, a professor of public health and human rights at Johns Hopkins, has been a vocal critic of Maryland’s approach to managing the crisis. In December, cases of the virus in the state’s prisons more than doubled.

“The single most important thing you have to do to deal with Covid in prison is to [reduce] overcrowding,” he told Vox. “We failed at that.” Although prison and jail populations dropped at the outset of the pandemic — mostly because fewer people entered the system due to virus concerns, rather than early release pushes — these populations are now on the rise again.

The second most important thing is to implement policies that can stem the spread of the disease, including social distancing and giving prisoners and staff masks and other essential supplies. “That, too, has been slow, inadequate, and insufficient,” Beyrer said. The Maryland Department of Corrections, he told Vox, isn’t providing free, unlimited bars of soap to people locked up in the state, leaving prisoners unable to do something as fundamental as wash their hands.

And the concerns don’t stop there. In facilities across the country, incarcerated people have reported a range of serious safety issues during the pandemic: correctional officers who refuse, or are not required, to wear masks; insufficient or failed efforts to test staff and incarcerated people; and the creation of new outbreaks by transferring Covid-positive prisoners to new facilities.

Meanwhile, vaccination has not even begun in most of the country’s prisons and jails, while those in other congregate settings — including nursing homes and homeless shelters — have been among the first in line to receive the shot.

“We are living through the failure of the basics of Covid prevention,” said Beyrer.

With all of these systemic shortcomings, many are extremely worried prisons and jails will be even harder hit when more contagious strains breach their walls. Early research has indicated that people infected with the new strain may carry higher viral loads, meaning that engaging in the same conduct — spending extended periods of time indoors without distancing — poses an even greater risk of spreading the virus than it did previously. For prisoners, that means that the worst outbreaks may be yet to come.

With so few resources to protect themselves and, in most places, no vaccine in sight, many prisoners are worried about the future. Jabriel Lewis is incarcerated at Allenwood federal prison in Pennsylvania. “That new strain got everybody in here scared as hell,” he said. “[I]f it gets into the federal institutions it could possibly mean a death sentence.”

For Michelle Angelina, a woman locked up in New Jersey’s Edna Mann facility, the threat posed by the new variants isn’t limited to the virus. The steps the prison system has taken to protect prisoners — shutting down all visitation, ending academic and substance abuse programming, and canceling religious services — will only be extended even further. “It’s putting an immense strain on all of us.”

Her concerns were echoed by Shebri Dillon, a woman incarcerated at Fluvanna Correctional Center at Virginia, who described the difficulty of spending “hours upon hours in a concrete cage, without seeing or hugging our children and family.”

“This new variant means an extension of all that pains us,” Dillon told Vox. “It is not a matter of if it will get in, but when.”

A matter of equity and public health

There are basic ways, however, to protect this large, vulnerable segment of the population — and the rest of the public at the same time.

For epidemiologists, advocates, and incarcerated people, the answer is to implement the policies they’ve recommended all along. “The implications of a more rapidly spreading Covid-19 variant in jails are clear,” said Robert Cohen, a physician who previously worked on Rikers Island and now serves on the Board of Corrections that oversees New York City’s jails. In addition to providing better access to basic PPE, sanitizing supplies, and testing, as many people as possible need to be released from prisons, jails, and other detention facilities, stressed Cohen, and all remaining incarcerated people and staff must be inoculated against the virus sooner rather than later.

In a handful of states, including Massachusetts and California, the vaccinations of prisoners have already begun — but in many places, including New York, they aren’t being prioritized for the vaccine. 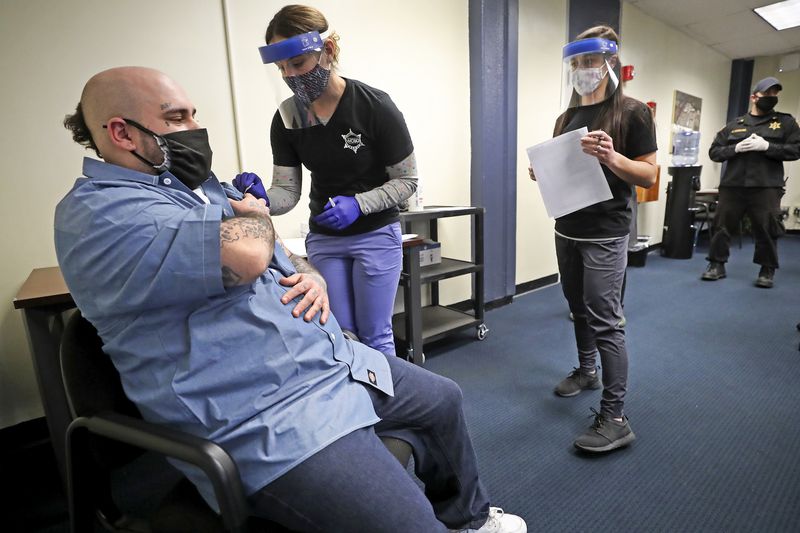 Advocates say this reality is just another example of the inequitable impact of the virus on poor people and people of color, given that Black and Latinx individuals are locked up at many times the rate of their white peers. “Despite calling for equity in vaccine distribution, [New York’s] Gov. Cuomo has neglected incarcerated people even while rolling out vaccines to other congregate settings,” including homeless shelters, said Katie Schaffer, director of advocacy and organizing at Center for Community Alternatives, which provides programming and policy work to reduce incarceration across New York state.

While many incarcerated individuals are eager to be inoculated, vaccine hesitancy does exist inside prisons and jails, in no small part due to the long history of medical experimentation inside these facilities. Some agencies are providing incentives to encourage prisoners to participate, including video visits with family members and slightly shortened sentences, while outside initiatives have sought to educate prisoners about the vaccine and its safety. Since the two coronavirus vaccines in the US currently only have emergency approval from the FDA, it’s likely unlawful for correctional authorities to mandate that prisoners or staff receive the shot.

Releasing more prisoners and accelerating the vaccination of those left inside is not only a matter of human rights, say public health officials — it’s also a necessary step to protect the public at large.

There are indications that widespread infection inside these sorts of facilities easily spreads to the community and beyond. One study found that the spring outbreak in Chicago’s Cook County jail contributed to about one in seven of the state’s total cases in the following months. Prisons have also incubated especially deadly variants of other illnesses, including strains of multi-drug-resistant tuberculosis.

“This is part of our public health,” said Meyer. “We should all want people who are in any congregate setting to have the best chance of preventing exposure and infection” — for their own health and safety as well as that of everyone else in the country.

Aviva Stahl is an award-winning investigative reporter who writes about how health care policy and scientific debates play out in the prison context. She’s written for a variety of outlets including Vox, the Guardian, and the New York Times, and can be followed at @stahlidarity.

Source: Prisons have already failed to contain Covid-19. What happens when the new variants arrive?