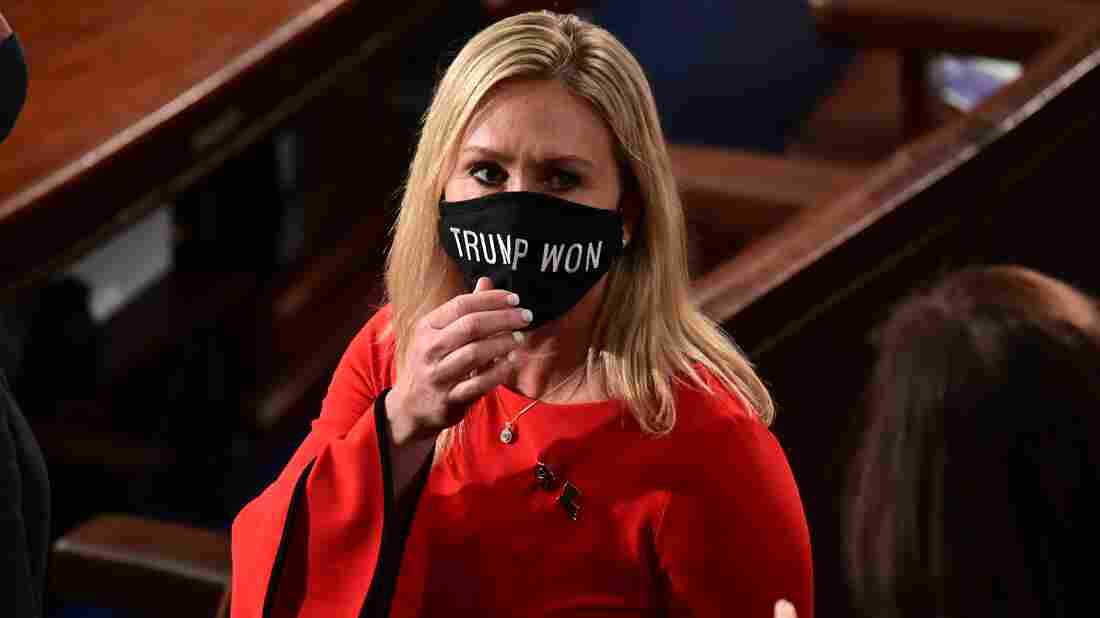 Rep. Marjorie Taylor Greene, R-Ga., wears a “Trump Won” face mask as she arrives on the floor of the House to take her oath of office as a newly elected member of the House of Representatives on Jan. 3. 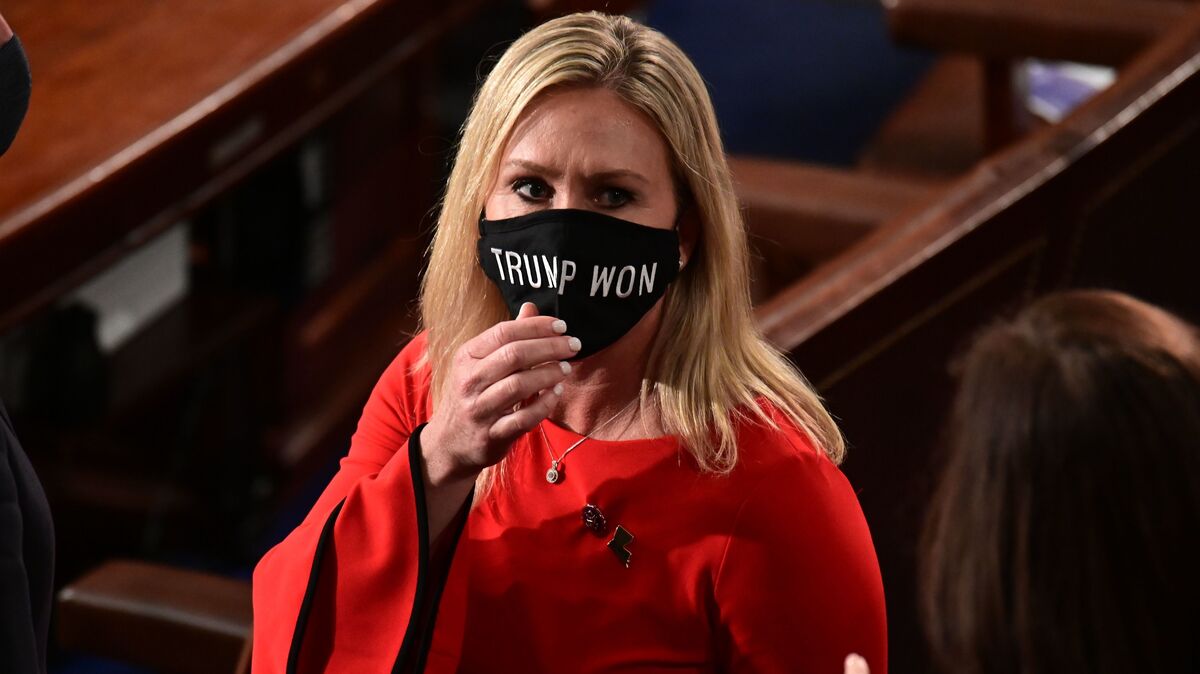 Rep. Marjorie Taylor Greene, R-Ga., wears a “Trump Won” face mask as she arrives on the floor of the House to take her oath of office as a newly elected member of the House of Representatives on Jan. 3.

The list is long of the baseless conspiracy theories that Georgia Rep. Marjorie Taylor Greene has embraced. She’s denied that a plane hit the Pentagon on Sept. 11; supported the idea that the Parkland school shooting was a “false flag” operation meant to usher in tighter gun laws; seemed to agree that Hillary Clinton was recorded “filleting” a child’s face.

Greene has also “liked” social media posts that called for executing “deep state” FBI agents, or that advocated removing House Speaker Nancy Pelosi with “a bullet to the head.” Greene supports QAnon and has said Muslims do not belong in government.

As reports on Greene’s history and flirtations with violence have come to light, Democrats have rushed to condemn her, suggesting she be censured, stripped of committee assignments, or more: Rep. Jimmy Gomez of California has promised to introduce a resolution that would expel Greene from the House of Representatives entirely. Other Democrats have said they would join that resolution.

California Rep. Barbara Lee said Greene “is a threat to the safety of members, staff, and our democracy. It’s time for her to go.”

Republican lawmakers have been more reticent. Utah Sen. Mitt Romney indicated in a tweet that Greene was speaking “nonsense.” But most have stayed silent; a spokesperson for House Minority Leader Kevin McCarthy said he plans to “have a conversation” with Greene about her “deeply disturbing” comments. The lack of forceful denunciation doesn’t sit well with many Democrats.

“A member of your caucus has harassed a Parkland survivor and Rep. @CoriBush, and made violent and dangerous statements,” Rep. Katherine Clark, D-Mass., tweeted Saturday. “How about serious consequences instead of a ‘conversation’, Kevin McCarthy?” (Rep. Bush of Missouri is moving offices after a confrontation with Greene over Greene not wearing a face mask.)

But dealing with rogue members isn’t among McCarthy’s chief concerns these days. McCarthy’s priorities this year have been “traveling to Mar-a-Lago to make up with the former president,” keeping his job secure, and regaining majority control in 2022, NPR correspondent Ron Elving told Weekend Edition. McCarthy met with Trump on Thursday, reportedly to secure his support.

And those Republicans who are staying silent? If they opened their mouths, Democrats might not like what they hear. “There are also Republicans who want to circle the wagons and defend Rep. Greene, much as they have defended the former president and his denial of the 2020 election results,” Elving said.

Even with a Democratic majority in the House, expelling Greene wouldn’t be easy. That would require a two-thirds majority vote, meaning around 70 Republicans would have to join the Democrats — something that would make them vulnerable to primary challenges. “And even then you’d have to ask, what would it ultimately accomplish?” Elving asked. “Would she not be more powerful as a martyr than she is now, far more important than she needs to be, with an even bigger megaphone?”

Some Republicans outside of Congress have condemned Greene. After the liberal group Media Matters reported this week on another conspiracy theory Greene had endorsed — that the November 2018 wildfires in California may have been caused by lasers from space linked to the Rothschild company — the Republican Jewish Coalition said it was “offended and appalled.” Other Jewish leaders have also vigorously condemned Greene’s embrace of “antisemitic canards.”

House Republicans have long known that Greene could be a problem for their party. “Everybody was well aware of her previous persona and who she is,” John Cowan, who challenged Greene during last summer’s primary runoff, told Axios. “Maybe they just assumed that the awe of winning an election would calm her down a little bit, and so she would actually be interested in governing and be interested in policy, and she’s just clearly not.”

In the absence of vociferous Republican condemnation in Congress, Greene is doubling down. In a statement Friday, titled “A Message to the Mob,” Greene thumbed her nose at detractors, claiming that the more the “radical, left-wing Democrat mob” and the “Fake News media” try to “take me out,” the more money she raises from supporters.

“Every attack. Every lie. Every smear strengthens my base of support at home and across the country because people know the truth and are fed up with the lies,” Greene wrote, blaming “cancel culture” and urging the GOP to stand in solidarity. “If Republicans cower to the mob,” she said, they would be “opening the door to let the vicious cancel culture mob take out every one of you.”

On Saturday, Greene said she had a “GREAT” phone call with her “all time favorite POTUS,” Donald Trump. “The blood thirsty media and the socialists hate America Democrats are attacking me now just like they always attack President Trump,” Greene said, adding: “I will never back down.”