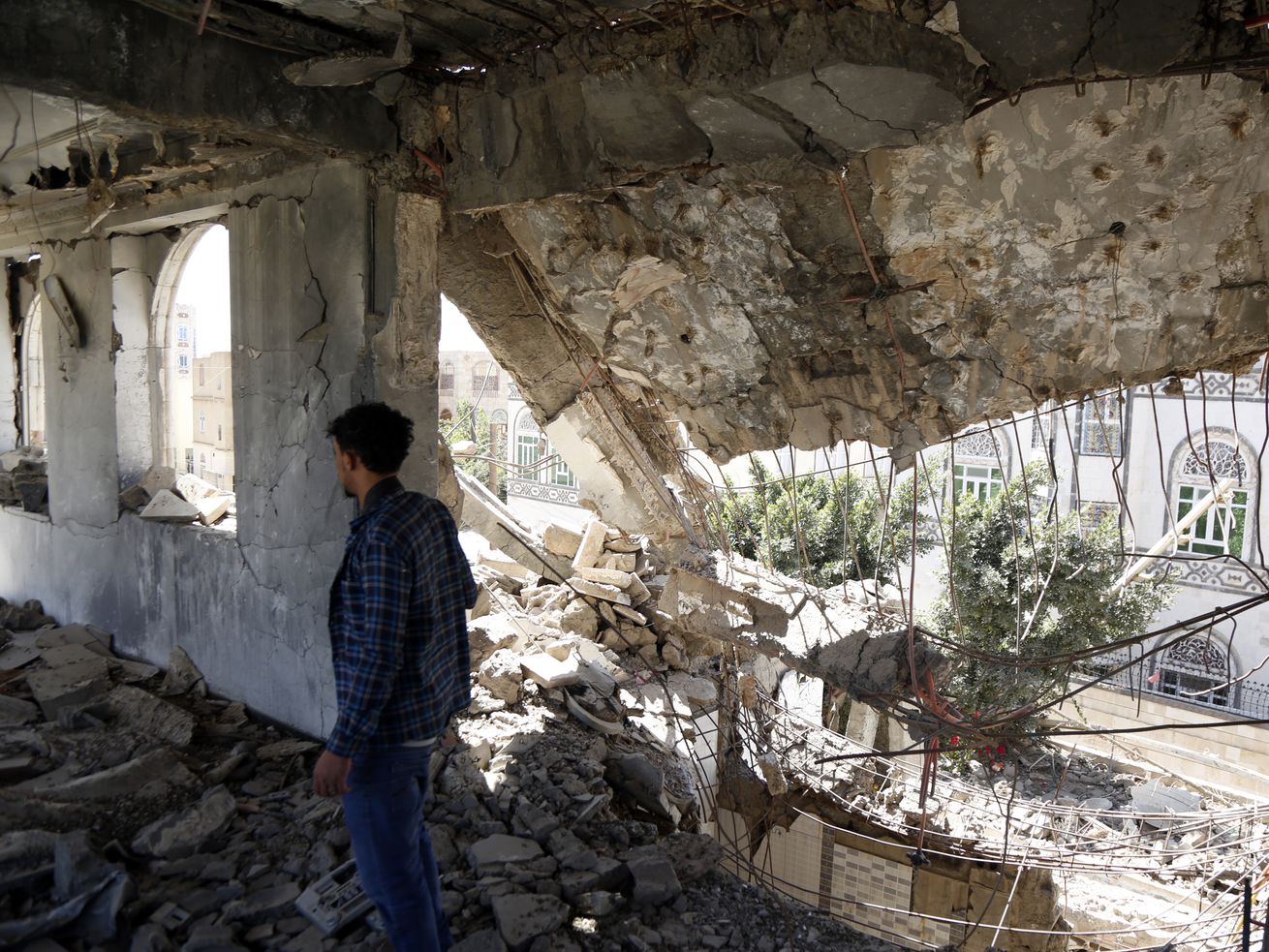 A Yemeni man inspects a destroyed house after an airstrike carried out by the Saudi-led coalition’s warplanes on February 5, 2021 in Sana’a, Yemen.  | Mohammed Hamoud/Getty Images

The US isn’t totally out of the war. It’s just shifting into a new, less destructive posture.

President Joe Biden announced on Thursday that the US would no longer support Saudi Arabia’s military intervention in Yemen. But the specifics of the new plan make clear Washington will still help Riyadh against Houthi rebels and other threats.

The US, then, isn’t totally out of the war. It’s just shifting into a new, less destructive posture.

Speaking at the State Department to deliver a foreign policy address on Thursday, Biden outlined America’s first real strategic shift on Yemen since the Obama administration, when he was vice president.

“We are ending all American support for offensive operations in the war in Yemen, including relevant arms sales,” Biden said. But then he added an important caveat: “At the same time, Saudi Arabia faces missile attacks, UAV strikes, and other threats from Iranian-supplied forces in multiple countries. We’re going to continue to support and help Saudi Arabia defend its sovereignty and its territorial integrity and its people.”

The US will also continue to fight terrorist groups in the country that directly threaten America like al-Qaeda or ISIS, a White House spokesperson told me on Friday. In other words, the US military will continue to operate in Yemen, but its focus will turn to terrorists that could plan attacks against the US.

The president also confirmed the appointment of Tim Lenderking as the administration’s special envoy for Yemen tasked with pursuing a diplomatic — not military — end to the fighting. “There is no military solution to the war in Yemen,” the White House spokesperson said.

These were pronouncements many Yemenis, activists, and humanitarians have long waited to hear.

Since 2015, the US has supported the Saudi-led coalition’s war in Yemen against the Houthis and helped those forces push back on Iran, the Houthis’ main supplier for weapons and funds. Until November 2018, the US refueled Saudi warplanes that dropped bombs on Yemen — many of which killed civilians, including children. But the US continued to provide logistical and intelligence support and, during the Trump administration, aimed to sell $23 billion in advanced weapons like F-35 warplanes, Reaper drones, and bombs.

The war has created a humanitarian disaster. The United Nations estimated in December that about 233,000 people have died since fighting began, mostly from indirect causes such as lack of food, water, and health services. Meanwhile, another roughly 24 million Yemenis require assistance to stay alive and fend off diseases like cholera.

Experts hope America’s new Yemen approach won’t just end a dark chapter of US foreign policy, but will also save thousands of lives. “The Biden administration is signaling that it’s actually going to have a Yemen policy that is focused on Yemen” and not just cozying up to regional allies like Saudi Arabia or opposing adversaries like Iran, said Scott Paul, Oxfam America’s policy advocacy director. “It’s the right thing to do, and it will have a dramatic impact.”

But some fear the plan won’t work and may even make the situation worse. “There could be unintended consequences of our disengagement that could actually accelerate misery,” Dave Harden, who formerly led the humanitarian development response to Yemen as a US official, told me. While he is in favor of the end of US military support for the war, he fears that doing so means “the Houthis may actually expand and consolidate power.”

It’s therefore worth taking a closer look at what Biden announced, and what it might mean for one of the world’s worst wars and humanitarian crises.

The new policy has three elements: the end of “offensive operations” in Yemen, the continued support for Saudi Arabia’s defense, and a new push for a diplomatic solution to the conflict. 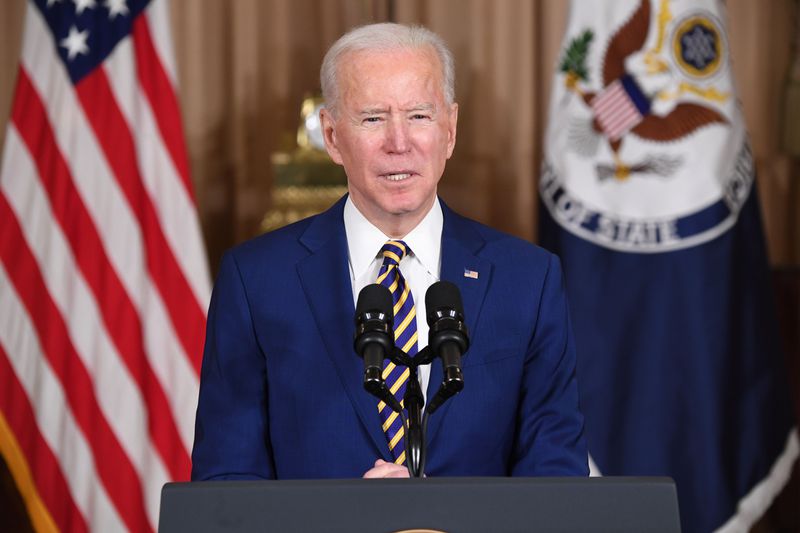 Saul Loeb/AFP via Getty Images
President Joe Biden outlines his foreign policy and his Yemen strategy at the State Department in Washington, DC, on February 4, 2021.

Let’s start with the “offensive operations” part. Simply put, the US won’t help the Saudi-led coalition fight the Houthis in Yemen anymore. If Riyadh’s forces want to bomb positions within the country, they will do so without US help to refuel warplanes, collect intelligence, or target positions.

Furthermore, the US won’t sell weapons to Saudi Arabia or the United Arab Emirates — a top coalition member — that they could use during the war like the advanced warplanes or precision-guided munitions. Those would be the “relevant arms sales” Biden mentioned, the same ones he froze to conduct a review of them last month.

But that doesn’t mean the US will stop fighting in Yemen. Per the administration, it will continue to strike al-Qaeda and ISIS militants in the country to ensure they can’t use it as a base to hatch plots against America. The US has been targeting terrorists in Yemen, most of them against al-Qaeda, since 2002 and as killed since around 1,000 people in strikes. Stopping that campaign, experts say, might give the terrorists more space to operate.

So ending support for the fight against the Houthis, and continuing the fight against America-threatening terrorists — that’s pretty straightforward. What isn’t as clear is what the second element, supporting Saudi Arabia’s defense, means in practice.

The biggest complication here is what defines an “offensive” versus a “defensive” move. Say the Houthis attack Saudi Arabia, which experts I spoke to expect they will continue to do. The rebels launched missiles at an airport and airbase in Saudi Arabia in 2019, and at Saudi oil stations last year. Under international law, Riyadh has the right to retaliate in a commensurate way.

Would the US help Saudi Arabia in such a retaliation?

For some experts, the ambiguity from Biden’s team here means the door for such support remains open. “I would’ve liked them to unequivocally say that the US is no longer going to be involved in Saudi aggression in Yemen,” said Annelle Sheline, a research fellow at the Quincy Institute for Responsible Statecraft.

One reason the Biden administration allowed for ambiguity, she surmised, was to keep Saudi Arabia happy while the US seeks to rejoin the Iran nuclear deal, which Riyadh opposes. Sheline worries Saudi Arabia could try to entice the US back into military support with claims that its actions are defensive in nature. “The whole war has been defensive in Saudi’s eyes,” she told me. Mohammed Hamoud/Getty Images
A Yemeni Houthi supporter takes part in a drive to fundraise for fighters on February 4 in Sana’a, Yemen.

But providing defensive assistance isn’t just about Saudi Arabia’s well-being; it’s about naked US self interest, too.

America has thousands of troops stationed in the country to deter Iranian aggression in the region. And per January comments by Marine Gen. Frank McKenzie, the military chief for all US forces in the Middle East, America wants to expand the number of Saudi bases to place service members while tensions with Tehran remain high. Furthermore, Saudi Arabia possesses about 17 percent of the world’s proven petroleum reserves.

Protecting US troops in Saudi Arabia and the oil America may want to import, then, could explain why the Biden administration wants to support Saudi’s defensive operations, experts say.

Then there’s the third pillar: seeking an elusive diplomatic solution to the conflict. Biden elevated Lenderking, who was already a top diplomat handling the Yemen conflict, to a special envoy. That means the war isn’t just some problem among many for the administration — finding a resolution is a key concern, and so the president further empowered Lenderking to broker a deal.

“The main focus of our efforts will be the diplomatic effort to end the war in Yemen via the UN-led process to impose a ceasefire, open humanitarian channels, and restore long-dormant peace talks,” the White House spokesperson told me. “Our primary objective is to bring the parties together for a negotiated settlement that will end the war and the suffering of the Yemeni people.”

That’s easier said than done. Most experts say the Houthis are winning their fight against Saudi Arabia as they continue to control the capital, Sana’a, and capture more territory. As a result the rebels have little incentive to negotiate for peace because fighting for longer could increase their leverage in future talks. “The incentives are in the wrong place,” Sheline said.

It’s also not clear a deal to keep the Houthis in power will be welcomed by locals. Not only have they prolonged the suffering and fighting in the country, but there are credible allegations of Houthis torturing and raping women. “Some Yemenis see the Houthis as Nazis,” said Harden, now the managing director of the consultancy Georgetown Strategy Group.

Biden’s switch to this new strategy, then, won’t magically make the situation in Yemen better in the short term. “No American official can end the war in Yemen with the stroke of a pen,” said Oxfam’s Paul.

But most experts agree that ending America’s limited involvement in the conflict is a wise, though imperfect, move. Washington’s role in Yemen until now made the US complicit in a horrid war for years, and it’s better late than never to seek a less calamitous path.

Source: Biden’s announcement on ending US support for the war in Yemen, explained