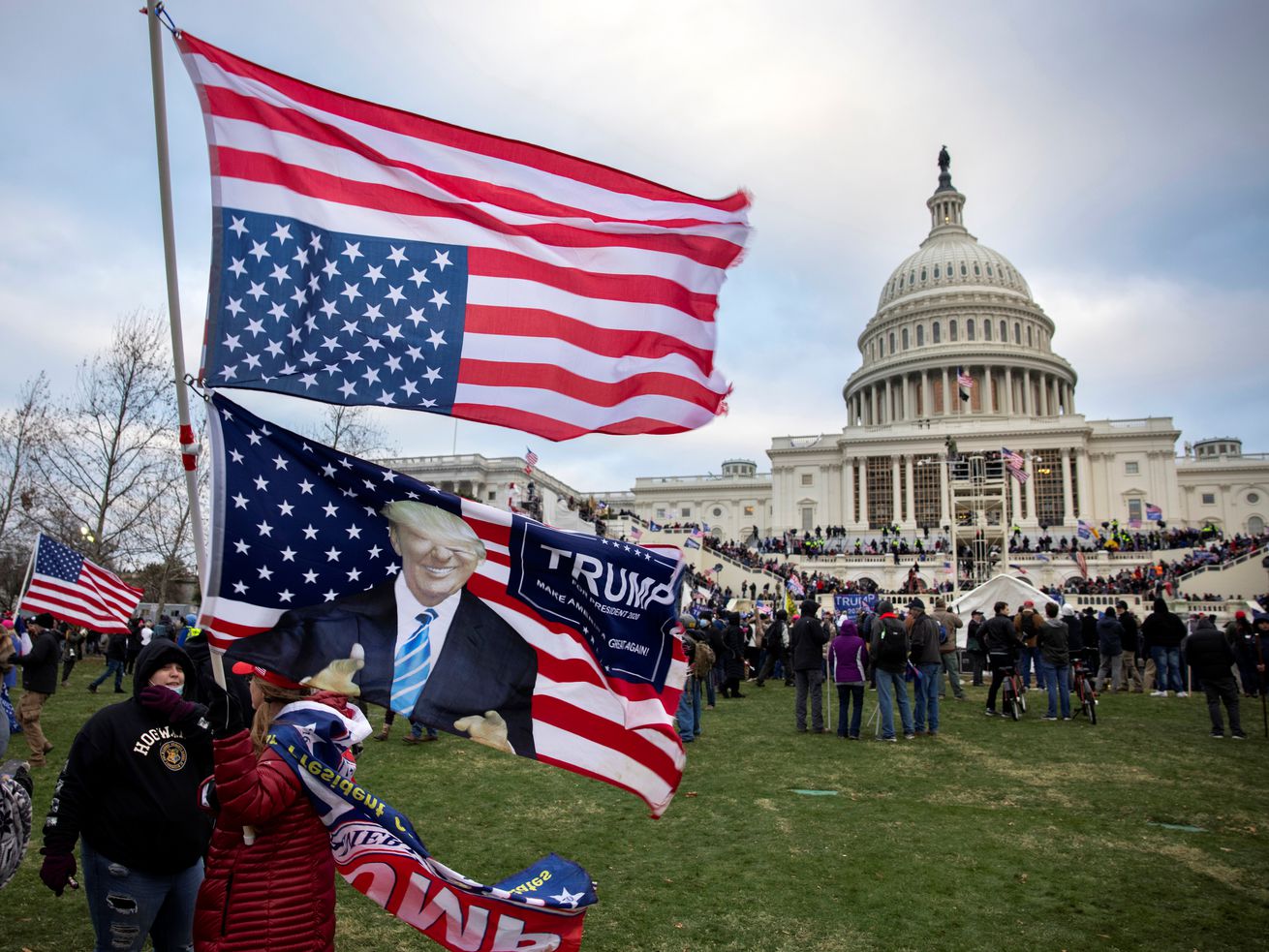 Trump’s impeachment defense failed because what Trump did was indefensible.

During their Friday afternoon impeachment arguments, former President Donald Trump’s attorneys accused Democrats of doing “constitutional cancel culture.” They suggested that antifa was partly responsible for the January 6 attack on the Capitol. They quibbled about a photograph in the New York Times and the meaning of a tweet using the word “calvary.” They made a risible argument that Trump’s impeachment somehow violated the First Amendment.

To combat the House impeachment managers’ striking use of footage from the day of the attack, Trump’s lawyers put together their own short films. One consisted in large part of Sen. Elizabeth Warren (D-MA) saying the word “fight.” Another featured an extended (and ostensibly less damning) cut of Trump’s infamous “very fine people” comment about the 2017 Charlottesville, Virginia, rally of white supremacists. Yet another featured Democrats and celebrities, including Madonna and Johnny Depp, saying nasty and violent-sounding things about Trump. They played that one three separate times.

This sort of nonsense took up most of the team’s short three-hour presentation defending their client against the charge of incitement of an insurrection. Only in the last 40 minutes — the section argued by lead defense attorney Bruce Castor — did Trump’s team make a serious and sustained attempt to rebut the core of the House’s case: that Trump is directly responsible for the violence that took place on January 6.

Castor ignored key facts, like Trump’s hours-long delay calling in the National Guard during the attack. His logic was at times incoherent, arguing (for example) that Trump’s disdain for Black Lives Matter protesters meant that he disapproved of violence committed by his own supporters as well. And he seemed to completely misunderstand key parts of the House’s case, like the role of Trump’s behavior in the months prior to the January 6 rally.

There really is only one reasonable conclusion to draw after watching the defense’s weak presentation: If this is the best his attorneys can do, Trump’s conduct truly is indefensible.

The many ways Trump’s defense failed

Over the last two days, the House impeachment managers made a very straightforward case for impeaching Trump.

For months, the president spread false and dangerous beliefs suggesting the election was stolen, including specifically calling for his supporters to rally in his defense on January 6 (the day that Congress would certify the election results). Once those supporters arrived, he encouraged them to act on those beliefs during his rally speech — intending to cause violence or, at very least, acting with willful negligence.

And once the mob acted — breaking into the Capitol and threatening elected officials’ lives — for hours he did nothing to stop them, and seemed at times to even encourage the mob. This makes him morally responsible for the insurrection and thus someone who should be convicted and barred from holding public office ever again.

What’s striking about Castor’s arguments is that, for the most part, they didn’t really rebut the core of the House’s case. They either danced around it or outright misinterpreted some of the core issues.

For example, Castor argued that Trump couldn’t have intended for a mob to attack the Capitol because the president hates mobs.

“We know that the president would never have wanted such a riot to occur because his longstanding hatred for violent protesters and his love for law and order is on display, worn on his sleeve every single day that he served in the White House,” Castor said.

But, as House impeachment managers pointed out, Trump has a very long history of encouraging violence by his supporters. At a 2016 rally, for example, he encouraged his supporters to “knock the hell” out of counterprotesters who were throwing tomatoes, adding that “I will pay for the legal fees” if they do.

And when he condemns “violent protesters,” he’s almost always talking about his political enemies — most notably, Black Lives Matter activists and antifa. There is no evidence that Trump has a principled abhorrence of violence, and lots of evidence that he revels in it when committed by his allies against his enemies.

Similarly, Castor argued that because some of the January 6 attackers were prepared for violence beforehand, there’s no way the president’s speech — which encouraged them to march to the Capitol and “fight like hell” — could have caused the violence.

“This was a pre-planned assault, make no mistake,” Castor said. “The president did not cause the riots.”

Except the fact that some rallygoers were prepared for violence prior to the speech doesn’t mean that all of them were. Violent militia members from groups like the Proud Boys and the Oathkeepers only make up a fraction of the arrests from the insurrection. It’s possible that a hardcore minority were prepared to try to attack Congress, but a much larger percentage of the pro-Trump crowd decided to join them after the president’s heated rhetoric inspired them to.

But Castor’s argument also misses something more fundamental: that if Trump hadn’t been falsely calling the election “stolen” for months, and calling on his supporters to try and help him overturn it, there would have been no pre-planned violence in the first place. This entire series of events only became thinkable because Trump had engaged in a sustained and successful campaign to convince millions of Americans that there was a nefarious plot to destroy American democracy. They planned to do violence before the rally because they believed the lies Trump had been telling them; indeed, the House managers showed video in which people storming the Capitol say they were acting on Trump’s orders. 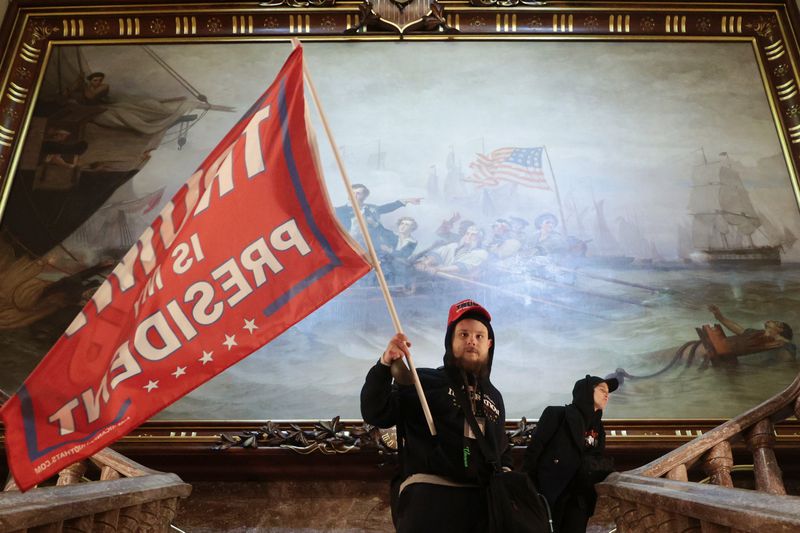 Win McNamee/Getty Images
A rioter holds a Trump flag inside the US Capitol on January 6.

Castor made a similar error in his discussion of Trump’s infamous January 2 call to Georgia Secretary of State Brad Raffensperger. He argued that Trump did not attempt to incite insurrection during this private phone call — in which Trump asks Raffensperger to “find” enough votes to overturn Joe Biden’s Georgia victory — and therefore that it was irrelevant.

But this was not the purpose of the House manager’s discussion of that call.

Their point was that the call was an inappropriate and arguably unlawful effort to overturn the results of a legitimate election, proving that Trump had intent to subvert the electoral and legal system in order to get himself installed as president. This is clear enough if you read the article of impeachment, which describes the call as part of Trump’s “prior efforts to subvert and obstruct the certification of the results of the 2020 Presidential election” — not a direct effort to incite the attack on the Capitol itself.

Perhaps the strongest argument Castor made is that Trump’s January 6 rally speech, the one the House alleges helped incite the rally, specifically called on protesters to act in a peaceful manner.

“The president’s remarks explicitly encouraged those in attendance to exercise their rights peacefully and patriotically,” Castor said. “The entire premise of his remarks was that the democratic process would and should play out according to the letter of the law.”

It’s right to say that the text of Trump’s speech gives him some cover, and that he never outright tells his supporters “go do violence now.” It might even lead to his acquittal in an actual criminal trial, where the standard required for conviction is different and justifiably higher than in an impeachment trial that carries no jail time as punishment.

But the line Castor cited was just that — one line — in a speech full of inflammatory rhetoric, including a direct call to march on the Capitol and “fight like hell.” You don’t need to nakedly endorse violence to create a situation in which it’s foreseeable that it could occur.

This is also why Trump’s inaction in the face of the violence — which he was watching unfold live on TV — is crucial: His refusal to call in the National Guard says much more about what he wanted than a pro forma line about peaceful protest. You can’t set up a situation where violence is likely, allow that violence to unfold, and then get off the hook for what amounts to a fine print disclaimer in the speech.

Trump’s response after the attack happened was not incidental to the House managers’ case. In fact, it was at the center of it.

In Rep. Jamie Raskin’s closing arguments, he posed four questions to Trump’s defense that he believed they would need to address if they were to “answer the overwhelming, detailed, specific, factual and documentary evidence we’ve introduced.” All of them centered on the president’s actions during the attack, which Raskin and the Democrats felt were damning proof of his intent to allow the violence to unfold:

One, why did President Trump not tell his supporters to stop the attack on the Capitol as soon as he learned of it?

Why did President Trump do nothing to stop the attack for at least two hours after the attack began?

As our constitutional commander-in-chief, why did he do nothing to send help to our overwhelmed and besieged law-enforcement officers for at least two hours on January 6 after the attack began?

On January 6, why did President Trump not, at any point that day, condemn the violent insurrection and insurrectionists?

At no point in Castor’s presentation did he even attempt to answer any of Raskin’s questions. During the subsequent Q&A, Sens. Lisa Murkowski (R-AK) and Susan Collins (R-ME) posed a version of these questions directly to Trump’s team. “Exactly when did President Trump learn of the breach of the Capitol, and what specific actions did he take to bring the rioting to an end and when did he take them?”

Here’s what the Trump team said in response:

There’s a lot of interaction between the authorities and getting folks to have security beforehand on the day; we have a tweet at 2:38 pm, it was certainly sometime before then. With the rush to bring this impeachment, there’s been no investigation into that and that is the problem with the entire proceeding. The House managers [did] zero investigation, and the American people deserve a lot better than coming in here with no evidence — hearsay on top of hearsay on top of reports that are of hearsay. Due process is required here, and that was denied.

This, of course, is not an answer — it is a dodge, much like all of Castor’s presentation beforehand. Trump’s team did not have good answers to Raskin’s questions because no such answers exist.

Trump’s conduct on January 6, and before it, really was indefensible. It was inevitable that the attempt to defend it would fail.

Source: The real reason Trump’s impeachment defense was so bad