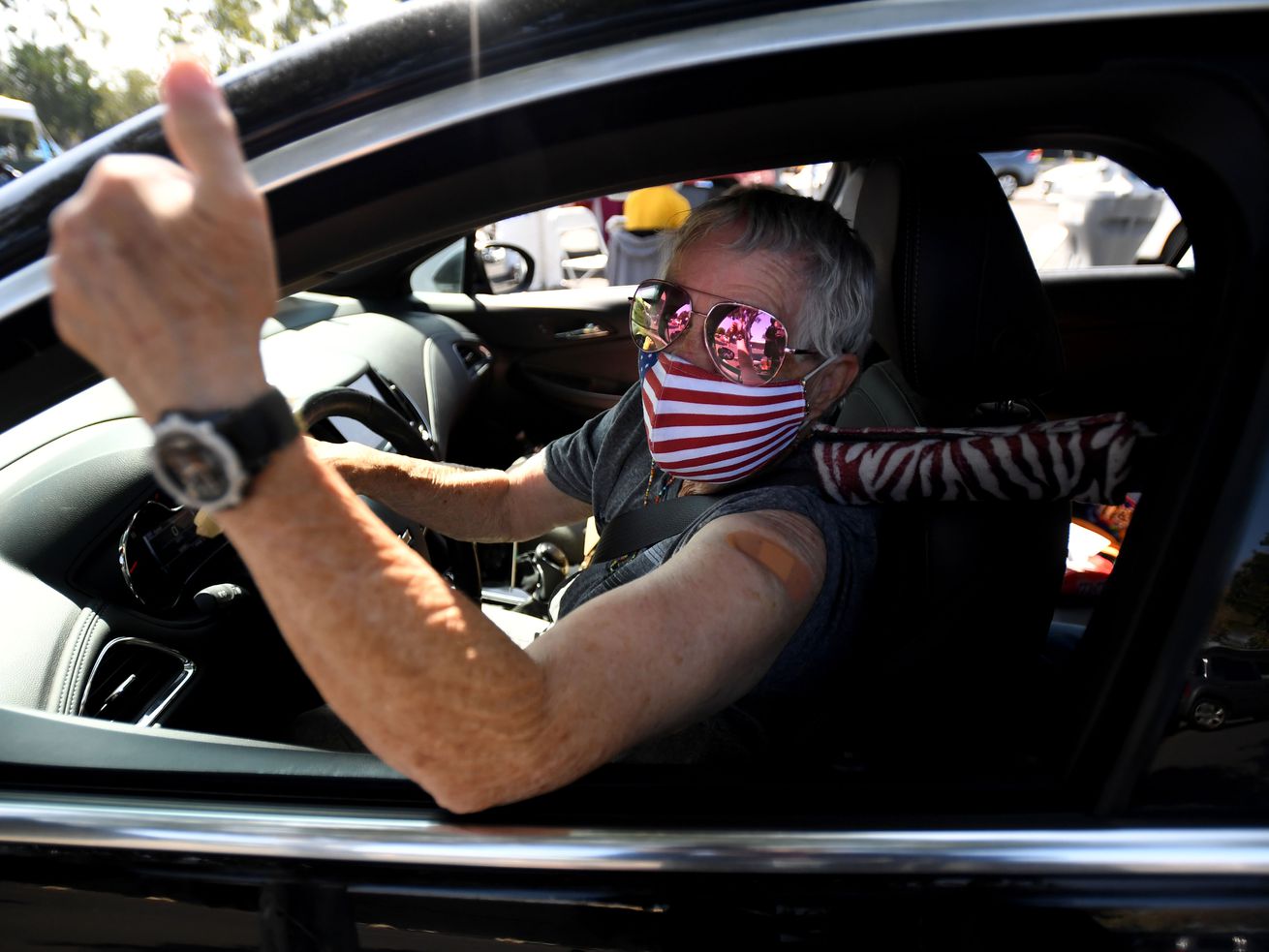 A woman who has just been vaccinated gives a thumbs up in California. | Brittany Murray/MediaNews Group/Long Beach Press-Telegram/Getty Images

More Americans than ever are willing to get vaccinated against the coronavirus, but a partisan divide remains.

The United States’ vaccination rate has been increasing — and as of Saturday morning, the Centers for Disease Control and Prevention (CDC) reported that 16.7 percent of US adults are fully vaccinated.

That’s an improvement over recent months; in November, before vaccinations had been rolled out, about 60 percent of Americans said they planned to be vaccinated.

But there remains a deep partisan divide in willingness to be vaccinated — and in how Americans view the danger caused by the pandemic. Pew’s work, and other recent surveys, have found Democrats are more likely than Republicans to be willing to take the vaccine, and are more likely to be concerned about the public health ramifications of the pandemic.

Those findings follow a recent poll from NPR/PBS NewsHour/Marist which found that 47 percent of people who supported former President Donald Trump in the 2020 election say they won’t choose to be vaccinated (versus 10 percent of Biden supporters), as well as a Monmouth University poll released earlier in March that found 59 percent of Republicans either wanted to wait and “see how it goes” before getting vaccinated, or said they were likely to never get one. By contrast, 23 percent of Democrats felt the same way.

Similarly, Pew found 83 percent of Democrats have been vaccinated, or plan to be, compared to 56 percent of Republicans.

The Kaiser Family Foundation and Washington Post recently discovered that partisan vaccine hesitancy extends to the medical profession. A survey they conducted from February 11 to March 7 found 40 percent of Republican health care workers — including doctors, nurses, and staff — feel available vaccines may not be safe and effective. That view was held by 28 percent of Democrat health care workers. 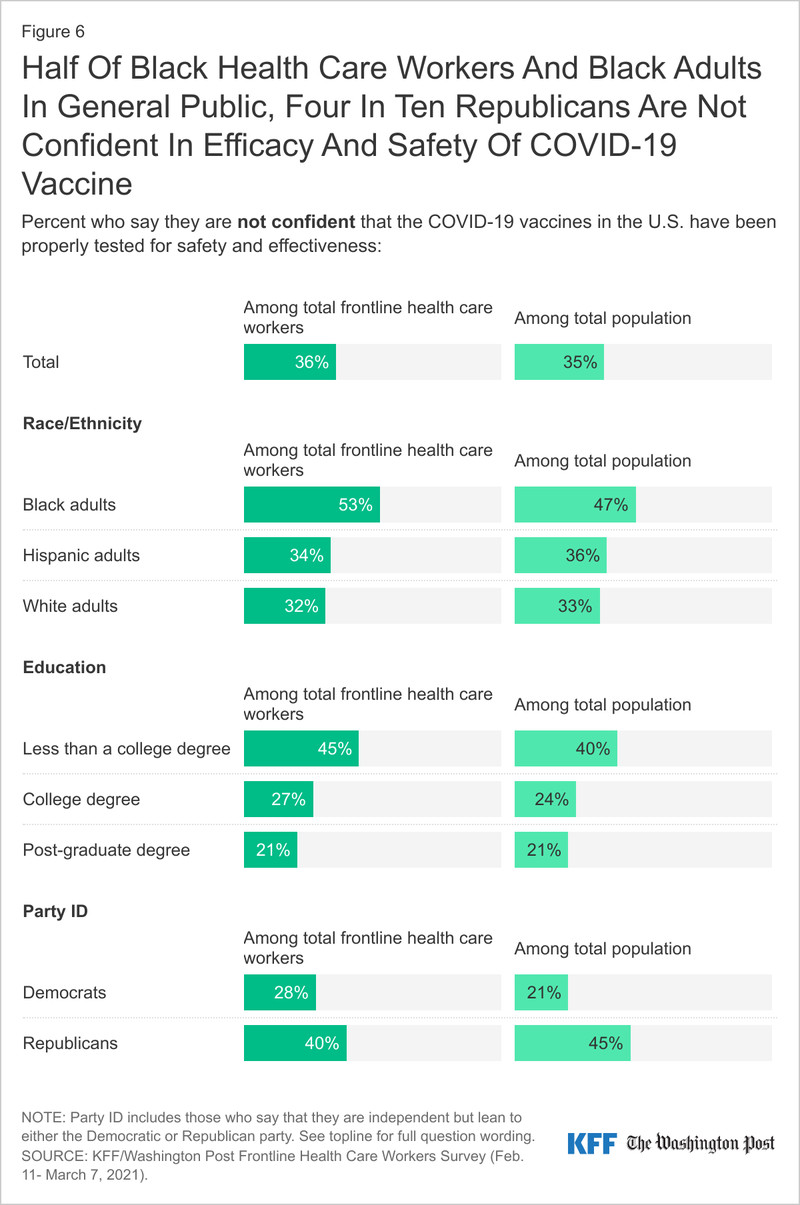 Why this is the case is not completely clear — Dr. Anthony Fauci, the top infectious disease expert in the United States, told Meet the Press that the divide “makes absolutely no sense.”

One thing polls have made clear of late is that people’s political inclinations tend to correspond with how worried they are about the virus in general, something that could influence how likely they are to take measures to prevent exposure and infection. 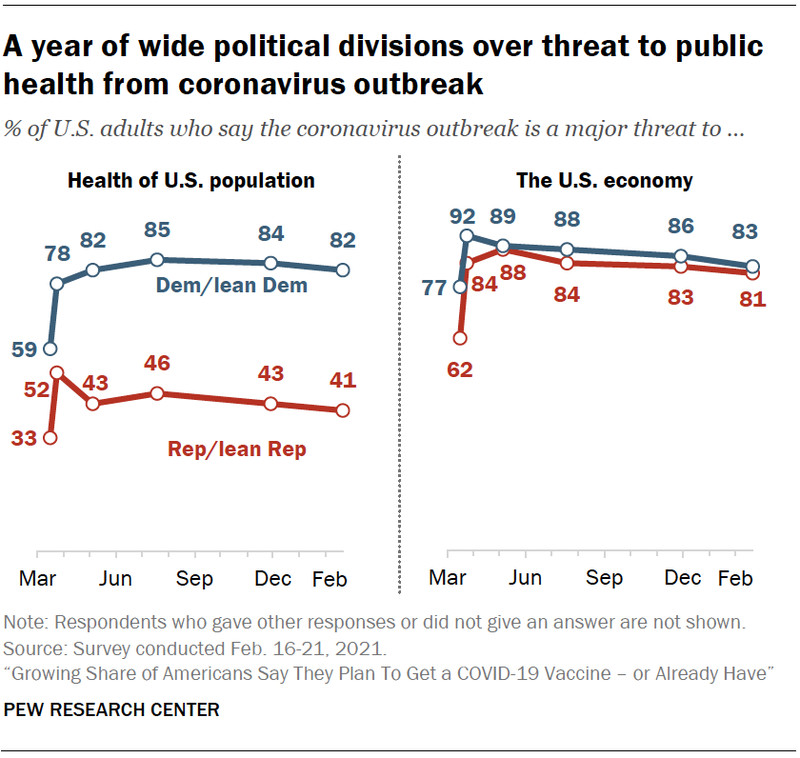 A Franklin Templeton/Gallup study conducted in December 2020 — when confirmed daily cases regularly topped 200,000 (compared to the 50,000 to 60,000 confirmed cases seen for most of March 2021) — found Republicans far less likely to believe a coronavirus infection posed a hospitalization risk than Democrats. Members of both parties were found to vastly overestimate an infected person’s chances of being hospitalized, with 28 percent of Republicans, 41 percent of Democrats, and 35 percent of independents believing the hospitalization rate was at least 50 percent. Far more Republicans than Democrats — 26 percent to 10 percent — correctly responded that about 1 to 5 percent of those infected must be hospitalized. 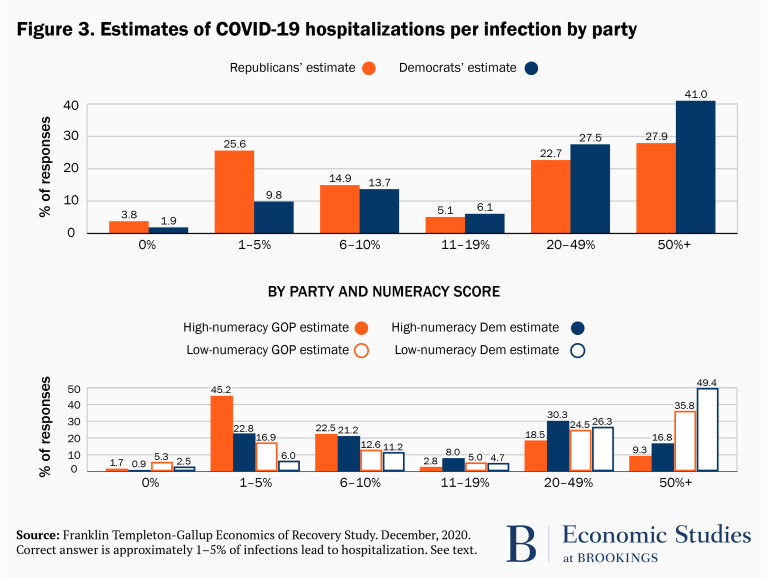 These numbers suggest that at least a portion of Republican vaccine hesitancy may stem from some Republicans feeling as if the coronavirus is not something that is overly dangerous — or something to fear.

The results come as a majority of Americans express optimism about the state of the pandemic. About 60 percent of Americans say that the “coronavirus situation” is getting better, and 26 percent said it’s staying the same, according to a Gallup poll taken February 14 to 21. Only 14 percent say it’s getting worse, the lowest response to that question since July. For the pandemic to end, however, more people than are currently willing to do so will need to take a vaccine — and key to making that happen will be overcoming hesitancy among all groups, Republican voters included.

Source: The partisan divide on vaccination, explained in 3 charts