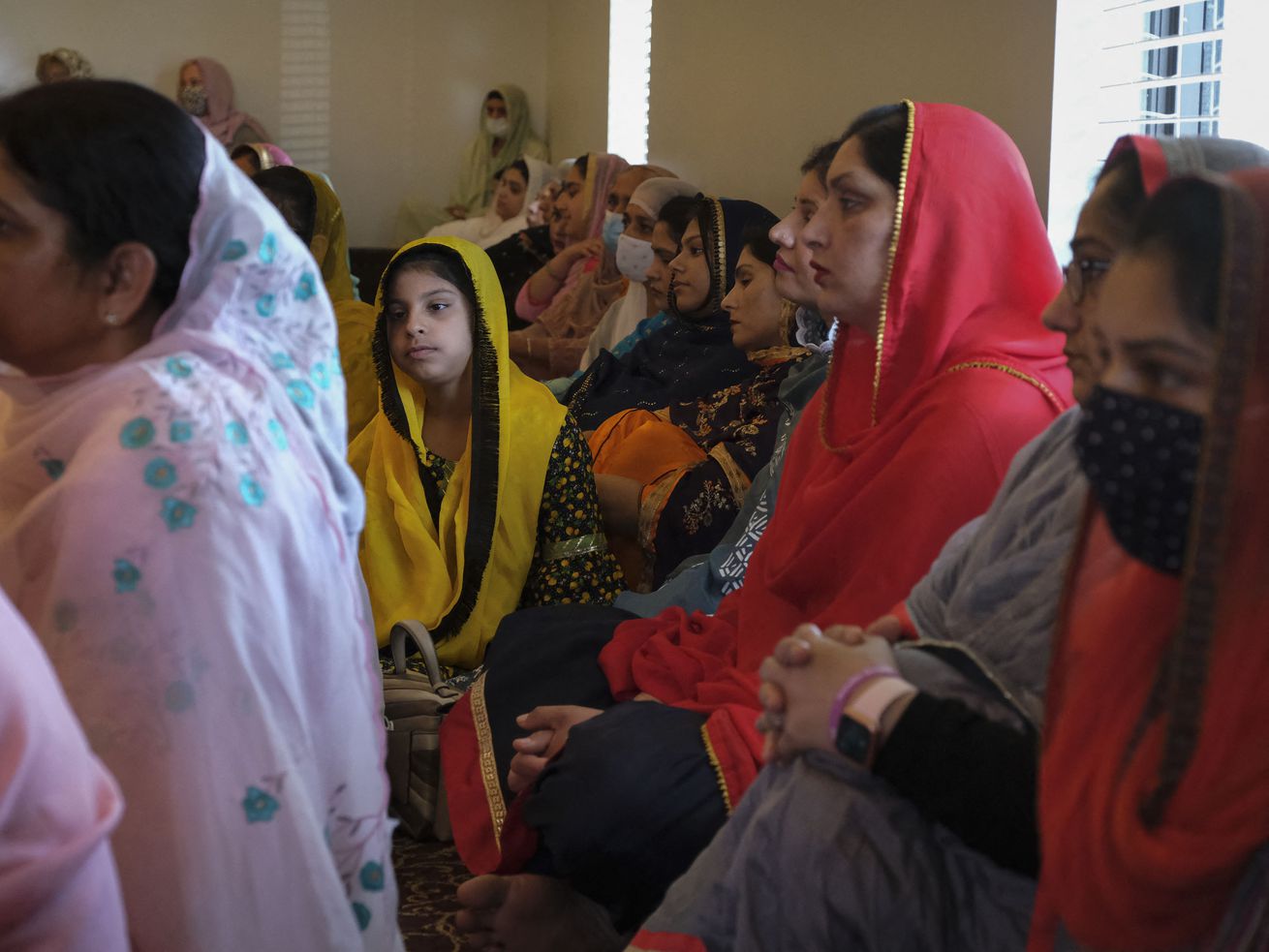 Members of the Sikh community gather at the Sikh Satsang of Indianapolis in Indianapolis, Indiana, on April 18, 2021. | Jeff Dean/AFP/Getty Images

Sikh Americans reflect on past hate crimes in wake of Indianapolis shooting.

Last Thursday, eight people were killed in a mass shooting at a FedEx facility in Indianapolis, including four Sikh Americans.

Thus far, not much is known about the shooter’s motivation, though his decision to target the FedEx location where he worked — which also has an employee population that’s about 90 percent Sikh — has renewed concerns about violence that members of the religious group have faced for years.

“Whether it’s explicitly anti-Sikh bias or implicit bias, our lived community experience immediately calls these issues to mind,” says Aasees Kaur, the Sikh Coalition’s legal client and community services manager. “It is an undeniable fact that this specific FedEx facility was an established place of employment for a high number of Sikh employees, and the gunman knew that.”

Activists in the Sikh community have been cautious about ascribing a rationale to the 19-year-old shooter — who had previously been reported to police by his mother for his propensity for violence — though they have urged law enforcement to investigate the role of discrimination. (In a past police report, officials noted that he had visited white supremacist websites in the past, though the FBI concluded after an interview that he did not ascribe to a racially motivated ideology.)

“Even if he had only visually scanned this facility before, there would be questions of targeting those he somehow thought to be different from him,” says Mallika Kaur, the acting executive director of the Sikh Family Center. “Anyone who does not enjoy the privilege of whiteness in this country would instantaneously think racism must be investigated as a motive.”

While data on hate crimes is still deeply flawed, information gathered by the FBI indicates that Sikh Americans are among the top targeted religious groups in the country in recent years, including as victims of fatal violence. In 2001, gas station owner Balbir Singh Sodhi was killed in Mesa, Arizona, by a shooter who espoused Islamophobic sentiments. And in 2012, a white supremacist killed six people at a Sikh temple in Oak Creek, Wisconsin, a suburb of Milwaukee.

For some, the Indianapolis shooting has made them recall these tragedies — and the feelings associated with them.

Nikky-Guninder Kaur Singh, chair of the religious studies department at Colby College, says it reminds her of the Milwaukee massacre that happened less than a decade ago, just four hours away. “It’s been very hard to process,” she said.

“We are shook, again. And we are mortified, again,” adds Sikh Family Center’s Mallika Kaur.

Sikh Americans have been the targets of xenophobia in the past

Sikh Americans are a relatively small group in the US, numbering about 500,000 people total, with approximately 10,000 living in Indiana.

As far back as the early 1900s — since the brutal riots in Bellingham, Washington, when white workers violently attacked Sikh men whom they viewed as competition for lumber mill jobs — Sikh Americans have faced xenophobia in the US. According to a 2020 SALDEF poll, 58 percent of Sikh Americans report being bullied or harassed because of their Sikh identity, while 63 percent of those who wear turbans say they’ve encountered bias because of it.

The Sikh religion was established in South Asia, in a region that spans parts of Pakistan and India, and is founded on the premise of equality, writes Simran Jeet Singh, a Sikh Coalition fellow:

The faith’s founder, Guru Nanak, was born in 1469 and was disenchanted with the suffering, divisions and social inequities he saw around him. He sought to establish a new community with a new vision rooted in oneness, love and justice. He taught that all people are equal and interconnected, and that human beings have no legitimate basis for creating hierarchies or discriminating against one another. Rather, each of us is inherently divine and we ought to treat one another accordingly. To serve humanity is to serve God (Vahiguru).

As Singh explains, a longstanding Sikh tradition — the Langar — is a free communal meal that’s available to anyone, as long as it’s consumed “on the ground together as equals.” During the pandemic, Sikh temples, or Gurdwaras, have become major sources of food aid in several states, CNN reports.

Because of how government officials and the media have portrayed the United States’ conflict with terrorist groups, Sikh Americans, Muslim Americans, and South Asians have experienced virulent Islamophobia, especially since 9/11. As part of the Sikh tradition, practitioners may wear turbans and wear their hair and facial hair long, attributes that have been othered in the past or conflated with stereotypes about terrorists. Many Sikh Americans have had to navigate both anti-Asian sentiments, including the “forever foreigner” trope, and Islamophobia.

As Sikh Coalition’s Aasees Kaur told Vox, there is a “history of dehumanization” the group has been fighting for years.

Because of such prejudices, members of the Sikh community have been subject to devastating acts of violence such as the 2012 shooting in Oak Creek, as well as a priest being punched and told to go back to his own country in 2019, a cab driver being attacked by customers who called him Osama bin Laden in 2010, and a man attempting to run over a Denver store owner in 2020.

“Nearly every family has a story of backlash,” says Kaur.

In the past week, Sikh Americans across the country have been holding candlelight vigils, virtual Kirtans, or music services, and prayer groups.

“The community is there to support not only the four Sikh victims, but all the victims,” says Kiran Kaur Gill, executive director of the Sikh American Legal Defense and Education Fund. “In Sikhism, how we process grieving is we come together.”

Activists spoke, too, about the connections that community members have with the victims. “We’re seeing their images and we’re seeing our own grandparents and parents in them,” says Manpreet Kaur of the Jakara Movement. “It’s just incredible grief right now.”

The Sikh Coalition is also among the groups calling for the passage of legislation that addresses current issues with hate crime tracking, as well as gun control. They’ve backed the Jabara-Heyer No Hate Act, which aims to improve the records that local law enforcement agencies keep of hate crimes, as well as the Disarm Hate Act, which would prohibit firearm sales to a person convicted of a misdemeanor hate crime.

Colby College’s Nikky-Guninder Kaur Singh also attributes violence toward marginalized groups, including Sikh Americans, to ignorance in the US, and emphasizes that educational curriculum in the country needs to be broadened as well.

“There’s total ignorance about other cultures, so Sikhs have been targeted,” she says. “To know about Sikh tradition in schools and colleges, Sikh art, Sikh films, Sikh music — I want it to be promoted everywhere.”

Improving such understanding would allow people to better counter existing divisions and polarizing rhetoric by public officials, she says.

“The basic principle of the Sikh tradition is one being,” Singh says. “We all belong to the same family.”